Be a Journalist to be a Photojournalist, Says Rajeev Bhatt 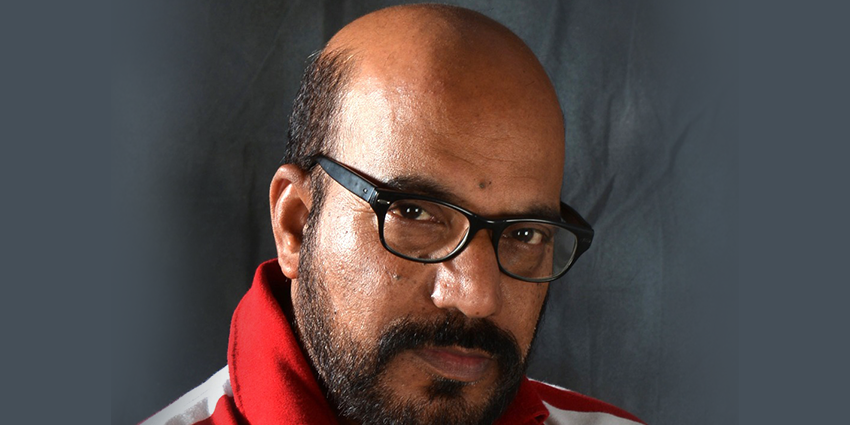 Some quotes seem to be written for certain people. As Ansam Adam’s “You don’t take a photograph, you make it”, looks so appropriate for Rajeev Bhatt, a senior special news photojournalist of The Hindu.

Rajeev Bhatt is an eminent photojournalist. He has over 30 years of experience in the field of photojournalism, covering major national and international news and sports events in India and abroad. Bhatt has covered the 16th Commonwealth Games in Malaysia, the 12th Asian Athletics Championships in Japan and the 14th Asian Athletics Championships in Sri Lanka.

He started by showing some of his work and explained each photograph in details that he had captured at different times and in different situations. He was also discussing the relevance, importance and background of those photos. He had shown the photographs of Kashmir insurgency, where he explained his personal experience of what difficulties he had faced to cover it as a photojournalist.

He explained how he could capture one of the encounters between militants and security forces in the absence of protecting bulletproof jacket and helmet, which were being used by other foreign agency photojournalists at Srinagar in 2002. Then he showed some visuals of the Gujarat riots in 2002, taken by him, which were used as the cover page of Frontline. Bhatt also showed a series of three photographs in continuity, taken by him in black and white of a cow hit by a car in the middle of the road, in 1994 at Delhi. After it got published in The Hindu, next day a  foreign  Agency, AFP, France sourced and released it Worldwide.

Bhatt showed some images of politically prominent figures like Prime Minister Narendra Modi and Mamata Banerjee at different times during their election campaigns. He also showed a human interest photo feature on how the people of Ghoramara Island, a part of Sundarbans, a mangrove area in the delta formed by the confluence of the rivers Ganga, Brahmaputra and Meghna in the Bay of Bengal, ferry in boats for 40 minutes to get connected with the mainland. The island which has got about 4,000 inhabitants, is regularly getting eroded due to the force of water.

Bhatt expressed his concern about the uncertainty of the life and property of inhabitants on the island, which might be lost in the sea forever within the next 25 years. He well documented the difficulties of people on the island to commute from there to the mainland in a series of photo features through his lens and shared it with the students and budding photographers. He wanted to focus on how environmental changes are creating severe distress in the life of people in this area.

Bhatt presented some of his works during the post-cyclone Amphan period in the South 24 Parganas in Sundarban area, which are mostly devastated. During this time, he had captured the life of farmers in that area, which was affected badly due to the cyclone. The saline water further destroyed their cereal cultivation, which made their life even more miserable. The audience was enthralled through the visuals when he narrated the story behind the photo taken by him.

Bhatt presented some of his assignment visuals for fashion photography to the audience. He shared the images of Wills and Lakme Fashion Weeks which he covered for many years. Bhatt is a well-known sports photographer, who had covered many national and international sports events in India and abroad, which he showed to the audiences. He also explained which telephoto lenses are used to shoot sporting events like Cricket, Athletics, Hockey, Football, Badminton and Formula 1 races.

Bhatt talked about photography as a skilled profession. The online photo storytelling is flourishing even during the pandemic. Hence, according to him, one should not bother about the market because photographers never go out of demand. But at the same time, the number of photographers is increasing daily. So, photographers should focus more on their quality of work. He added that the photo has to be an idea, a vision, and imagination what the photographer wants to show people which cannot be described even in thousands of words.

Speaking about whether photo-editing software is essential in photography, Bhatt said that it is important to know how to enhance the quality of an image without changing the originality of photographs. He advised students and budding photographers to get trained in professional schools and have degrees. He also agreed that without knowing the basics of photography, an online course on photography is not useful.

He further said, “Equipment does not matter, but what is more important is to know how to use the tools.” For that, one should have to visit colleges and take professional training in photography to brush-up their skills. He said, “You first have to be a journalist to be a photojournalist.”